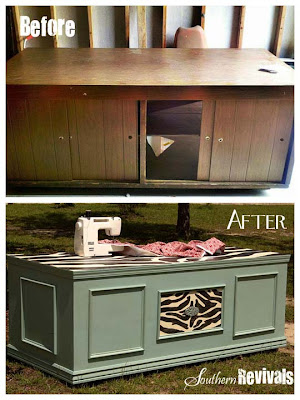 If this revival were a TV show it would be called Extreme Makeover – Furniture Edition. It may not look like it but this was, by far, the biggest, most extreme revival I’ve ever done. Meet Beast who became Beauty….this is her story. 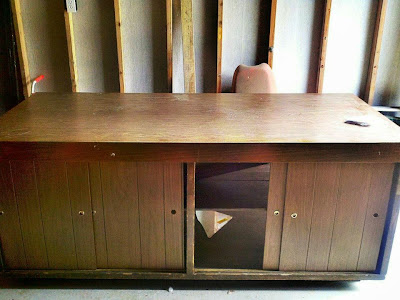 I’m going to tell you the truth. Sometimes, when working with the vintage, it would be easier to start from scratch and just build it yourself than to revive it. This was one of those times. 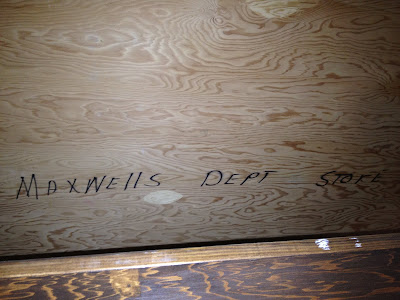 Maxwell’s Dept Store written underneath the top
HOWEVER, this particular cabinet came from a clothing store from my hometown of Jesup, Georgia, called Maxwell’s, and everyday on the way to school I passed this store. I shopped there and so did generations before me. So when an old friend of mine from high school obtained this cabinet for a mere $10, I was excited to do the hard work necessary to revive it. Because even if I could have built one a lot more quickly, not to mention much more easily, it wouldn’t have had a story. And really, in the end, that’s what it’s all about for me. You know the old saying, if walls could talk? Well for me it’s a lot like that only with furniture. 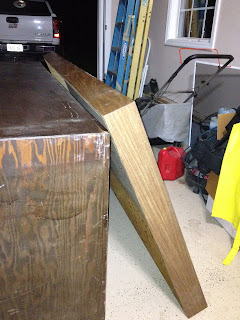 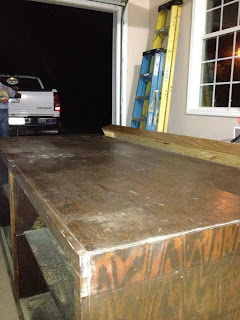 We discovered the cabinet’s history when we removed the top
First things first, remove that laminate top. I can’t tell you how excited I was the top lifted right off. Not because you can’t paint laminate (I’ll be meeting this challenge in a future revival – stay tuned) but because it totally threw off the vision of how I saw this cabinet ending up. Plus, underneath the top was real wood and I’ll take that over laminate any day. 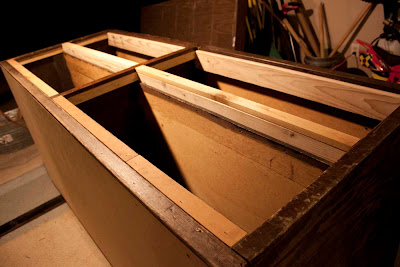 The next thing to address was the fact that Beast had sliding doors on both sides, which is great for storage, not so great for stability. Also, she had a simple 2 x 4 inset base that she rested on. I’m not sure how that worked when she was new but at this point, between these two issues, she swayed like a tree in a hurricane. So, how to fix her? 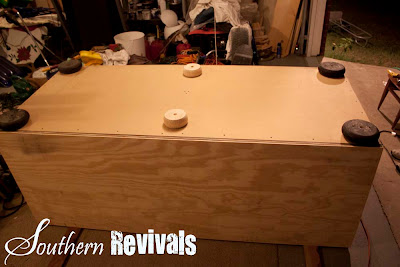 We decided the best way to stabilize her and give her the design I’d envisioned was to replace a set of the sliding doors with a solid front, add an MDF panel to her bottom (think of it like plastic surgery for furniture – this would be a butt-lift)and give her some cute, but not too tall, legs. I would love to tell you that fixed our stability problem but we wound up having to add extra stability within the cabinet itself as well. 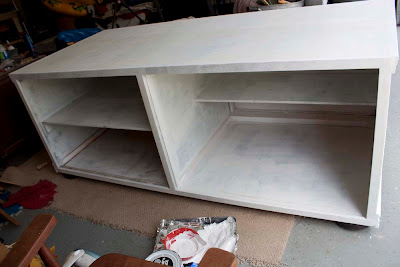 Since the cabinet would be used as a sewing desk we had to make sure she didn’t shake or sway. At all. We also had to keep in mind that someone would be sitting here and would need her feet to reach the sewing pedals so Beast couldn’t be too tall. We notched out one of the shelves on the right side to leave room for knees and made it the perfect height for her new owner to place the sewing pedal, and her feet, into the bottom of the cabinet. With the structural issues addressed, it was time to move on to the fun part – paint! 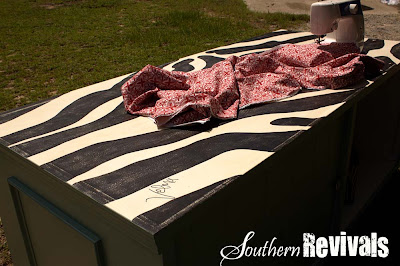 My client had very specific instructions – “I want something no one else has. I want her to be different and unusual and I want her to have zebra stripes!”. And I said, “Yes Ma’am!”. 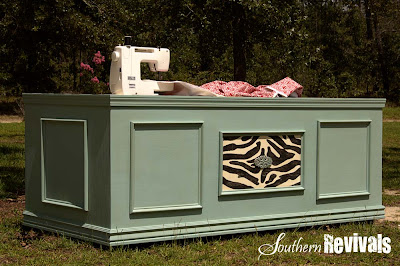 I added a zebra panel to the front as well to bring the theme down instead of just having it on top. 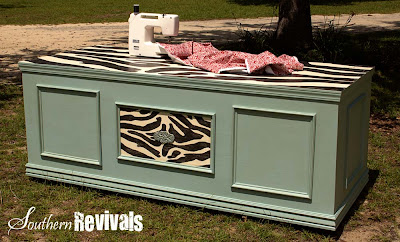 To break up the vast expanse of the front of the cabinet, I added picture frame molding as well. Plus, this makes it look more like a piece of furniture. 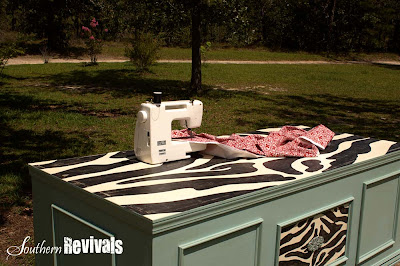 And there you have it! A Beast to Beauty transformation. It seems like it took an eternity and I couldn’t be more thankful to have had such an easy client who has the patience of Job. 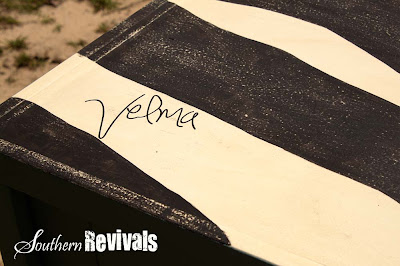 Per her request, we added ‘Velma’ to one of the corner ends on the top in memory of her grandmother who was also a seamstress. It looks as if Velma will be signing off on all future projects from now on. 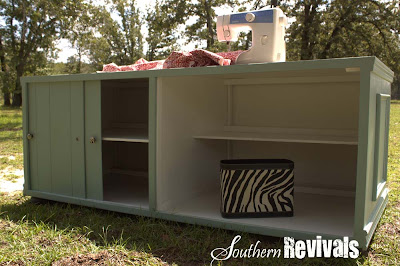 We added back one set of sliding doors, with zebra knobs, of course and left the right side open. This is where she’ll sit to sew. 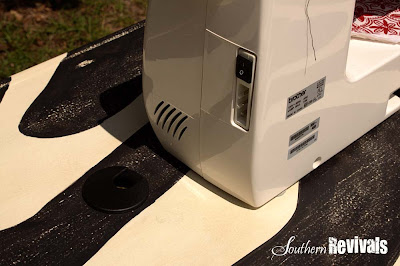 Since her feet will rest on the bottom of the cabinet instead of the floor, we added a cord holder disguised in one of the black stripes to allow the cords to drop down into the cabinet.

And finally, she was done. A Beast to a Beauty. I will now refer to myself as, ‘The Plastic Surgeon of Furniture’. And it was so worth it! What do you think?

**As always, please join me on my Facebook page: Southern Revivals. We’re having fun over there and they always know what’s going on before anyone else does!** 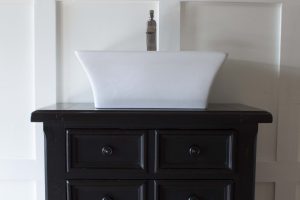 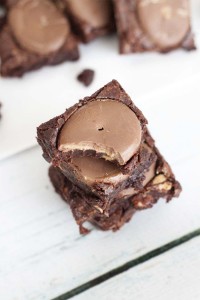 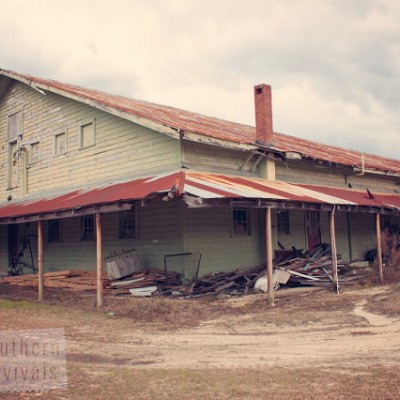 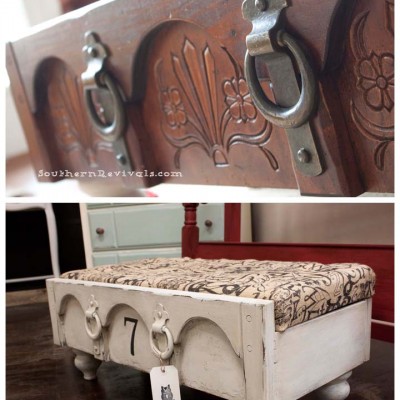 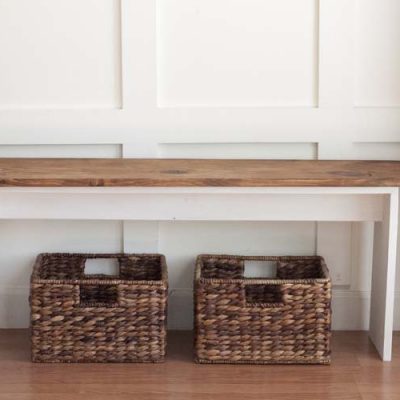 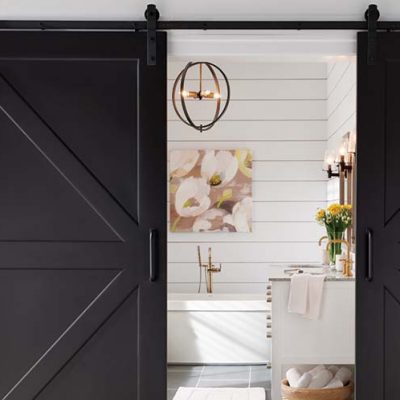 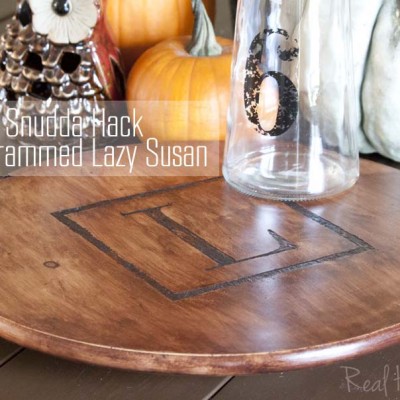