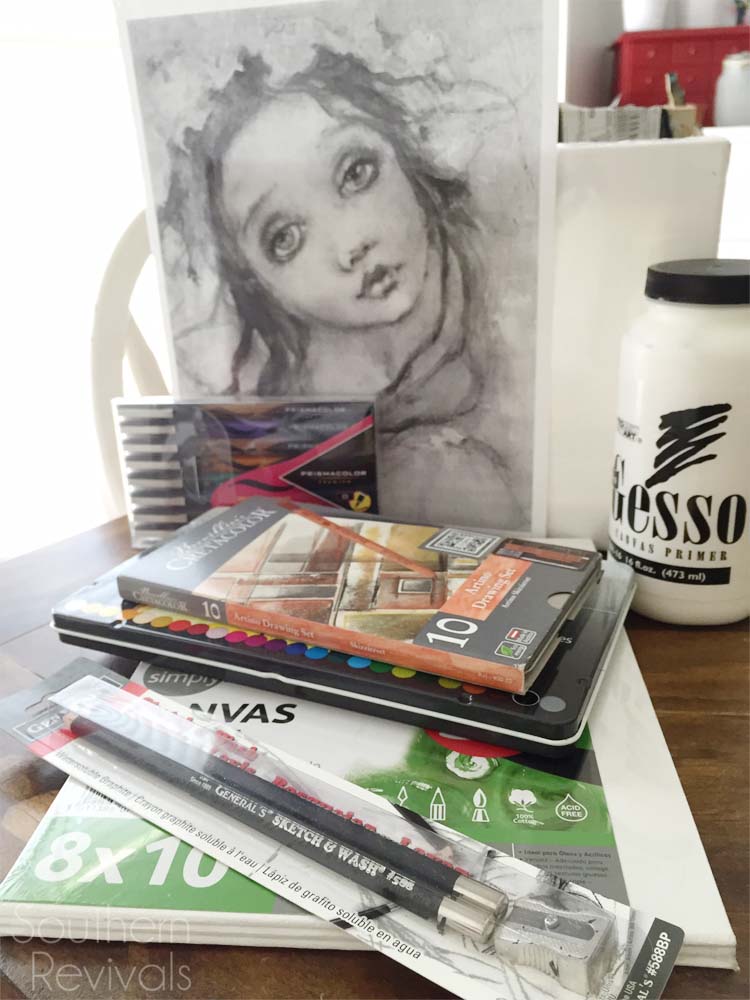 There are a million things I’d like to learn how to do. Play the guitar. Speak another language. Travel the world. See Manhattanhenge in person. Learn to paint. Not furniture, not walls but really paint. I recently took a painting class and I wanted to share with you. Because, even if you don’t want to learn how to paint people, I’m giving you permission to do something for yourself and learn how to do something you’ve always wanted to. Check out how my first painting turned out… 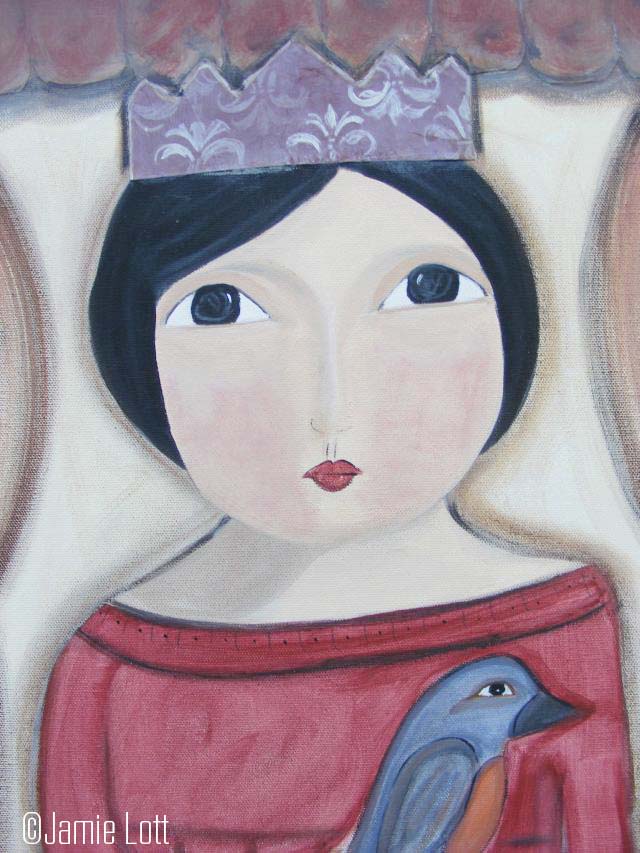 It wouldn’t exactly be fair if I didn’t mention that this isn’t the first time I’ve tried. Painting people, I mean. I’ve just never really been very good at it. 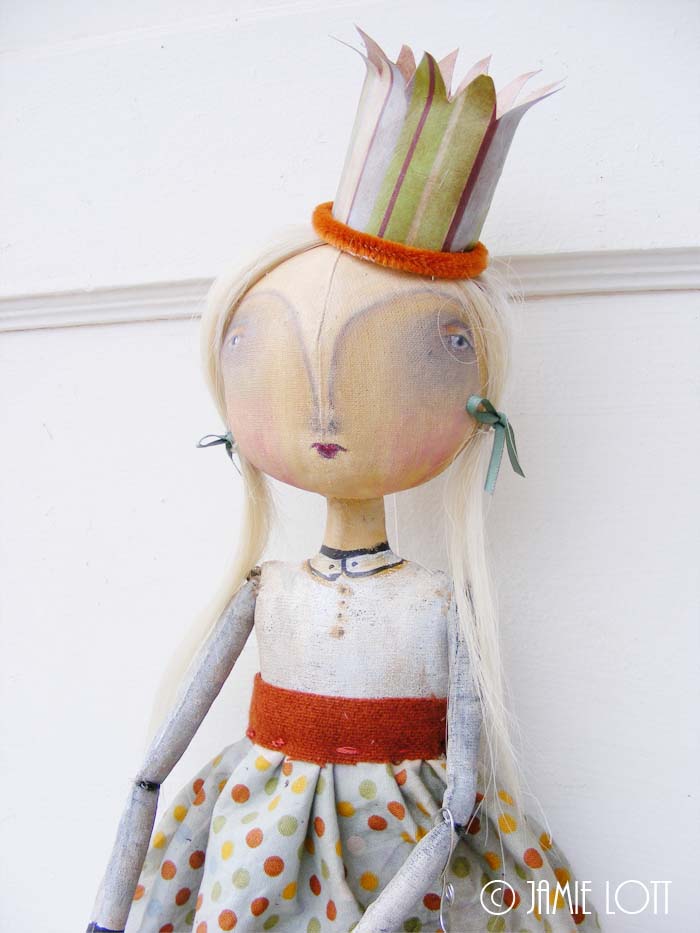 For those of you who don’t know, I started off blogger life as a folk artist. I always had better success at painting something 3-dimensional as opposed to painting on a flat surface and making it seem 3-D. 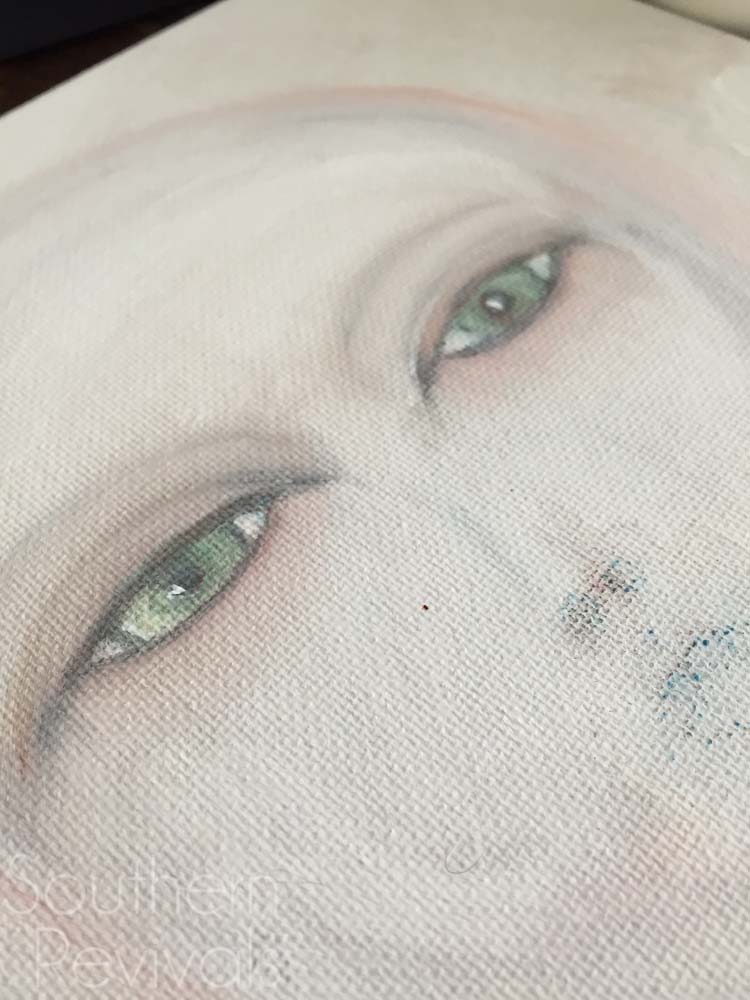 It doesn’t stop me from trying though. Even if all I can manage is some alien-human hybrid. Then again, I have no formal art training. You’ve been getting creative inspiration from a Psych major all this time. 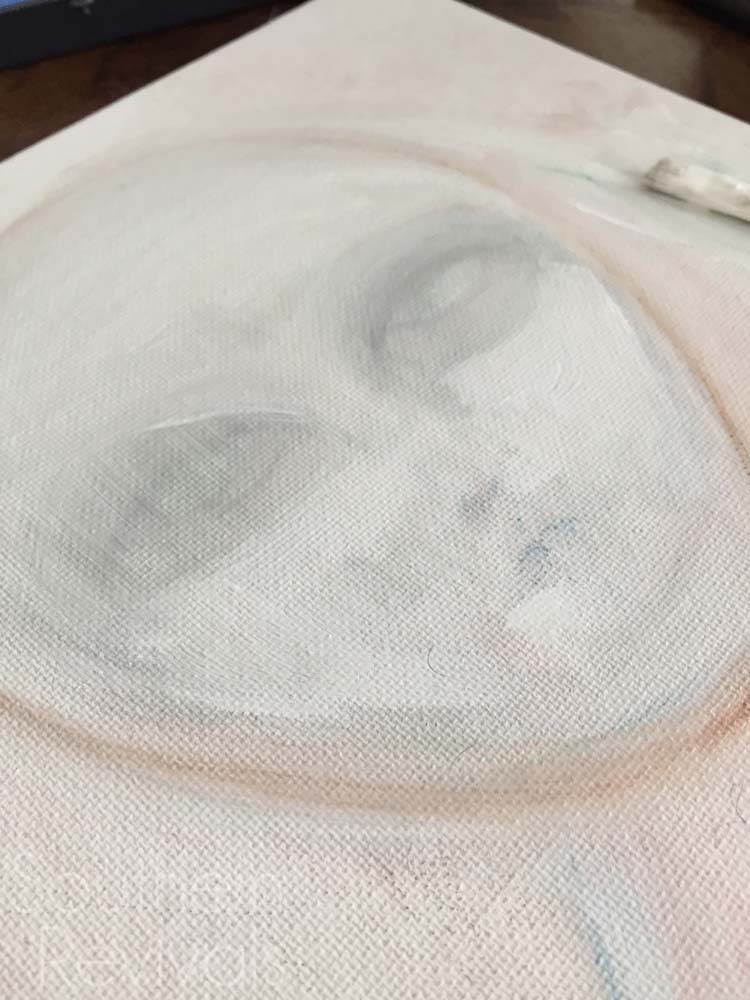 I recently started a painting from my first art class, Simply Painting Faces from artist Karen Milstein. She’s someone I know from my folk art days and last year when she offered a sale on her painting classes I thought, it’s now or never.

Then I took a whole year to actually do it. 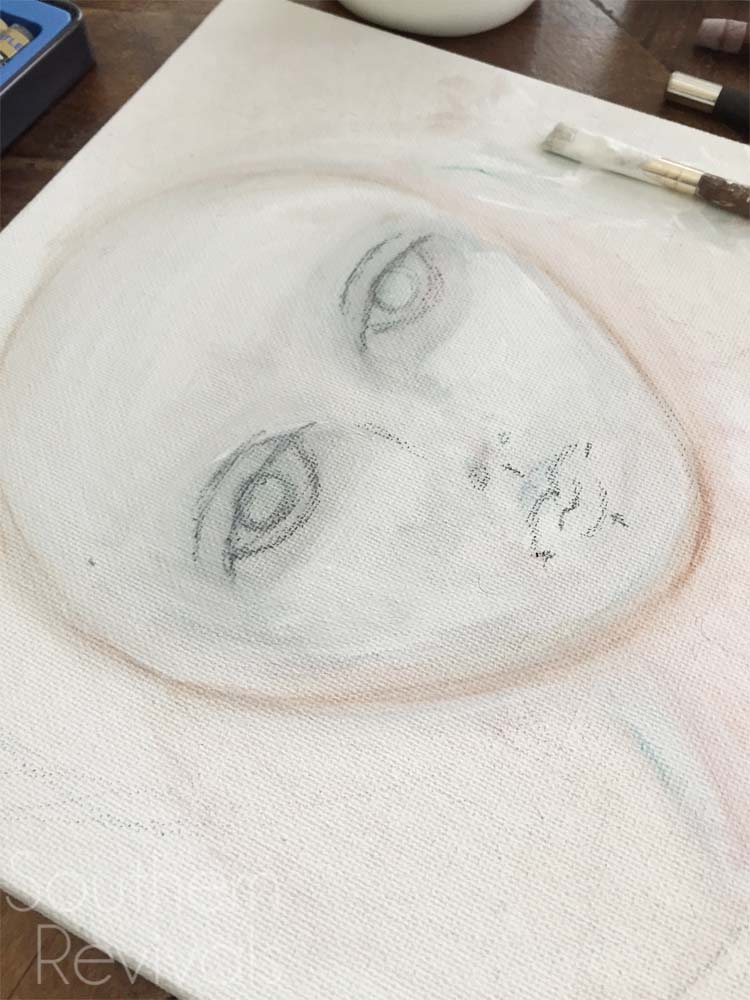 When I finally did watch the videos a whole year later, I watched them obsessively and I decided that if all I ever did was just watch the videos, it was worth it. It’s so mesmerizing for me to watch people creating art.

Also, they make it look easy. Like those sugar cookie decorating videos on FB. I’ve secretly been attempting that as well. It’s NOT as easy as it looks. In case you were wondering. 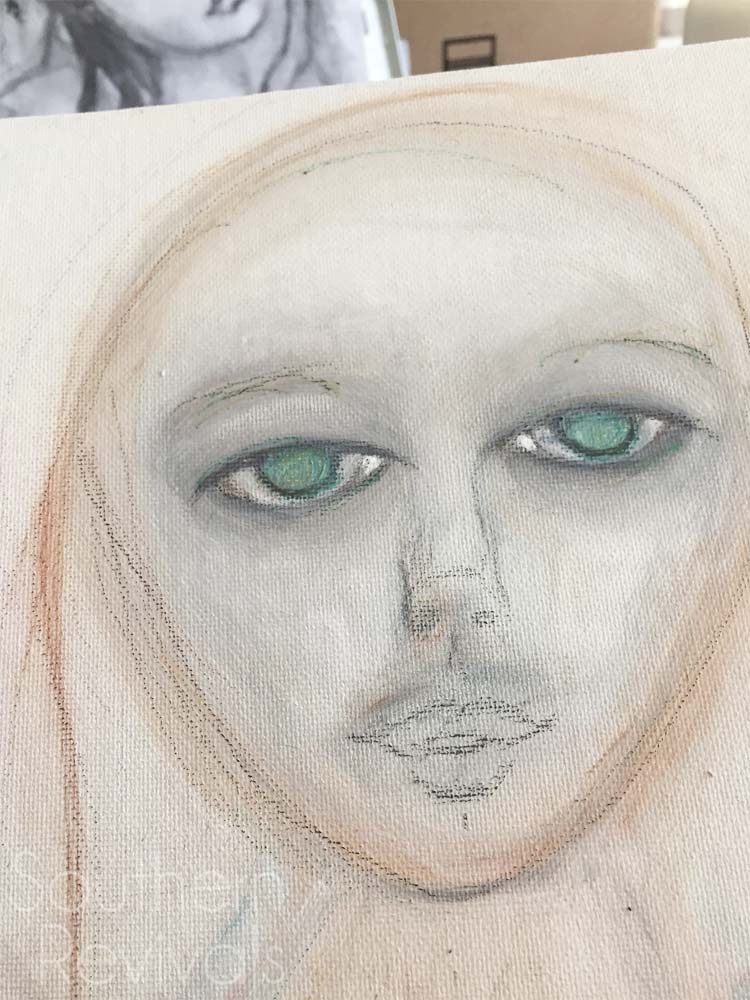 If this were a Madonna song it’d be called, Like a Hooker with a Mustache

I had watched the videos more times than I could count at this point but all of the art supplies I’d ordered from Amazon hadn’t arrived yet and I was desperate to get started. So rather than tracing the included inspiration image, I tried drawing it on my own.

That’s when I almost gave up.

What if I’ve wasted money on all these supplies? 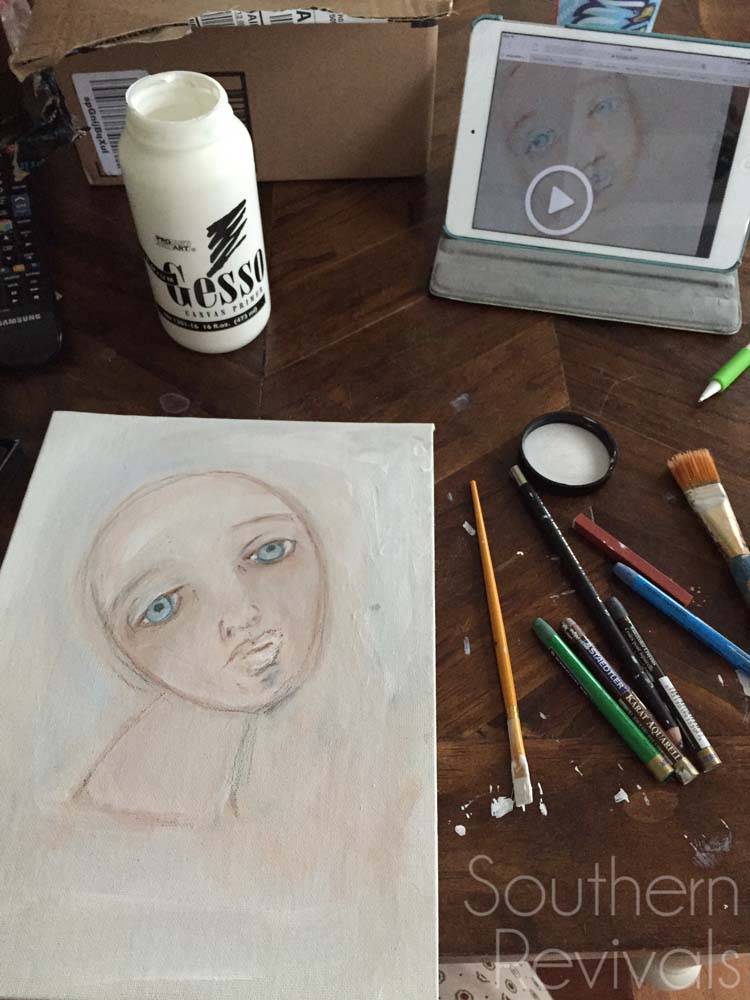 Then that fun Amazon box arrived and just unpacking all those colorful new supplies got me excited about trying to learn this all over again. This time I traced the image as instructed and I was off to a better start.

I still can’t draw. Maybe I’ll tackle that next. 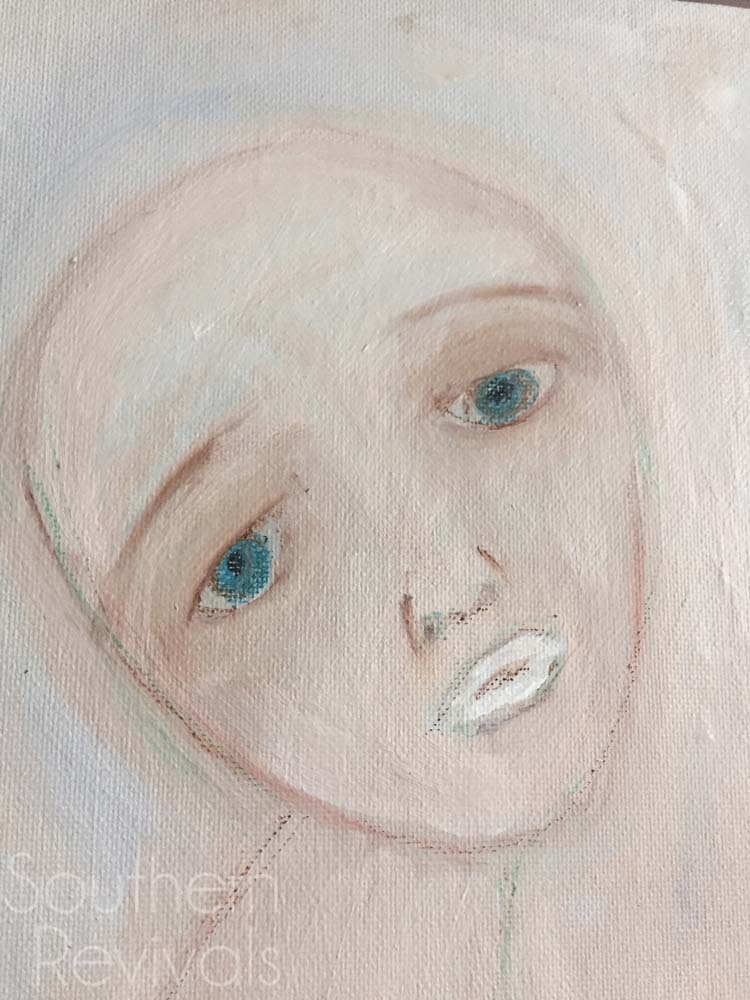 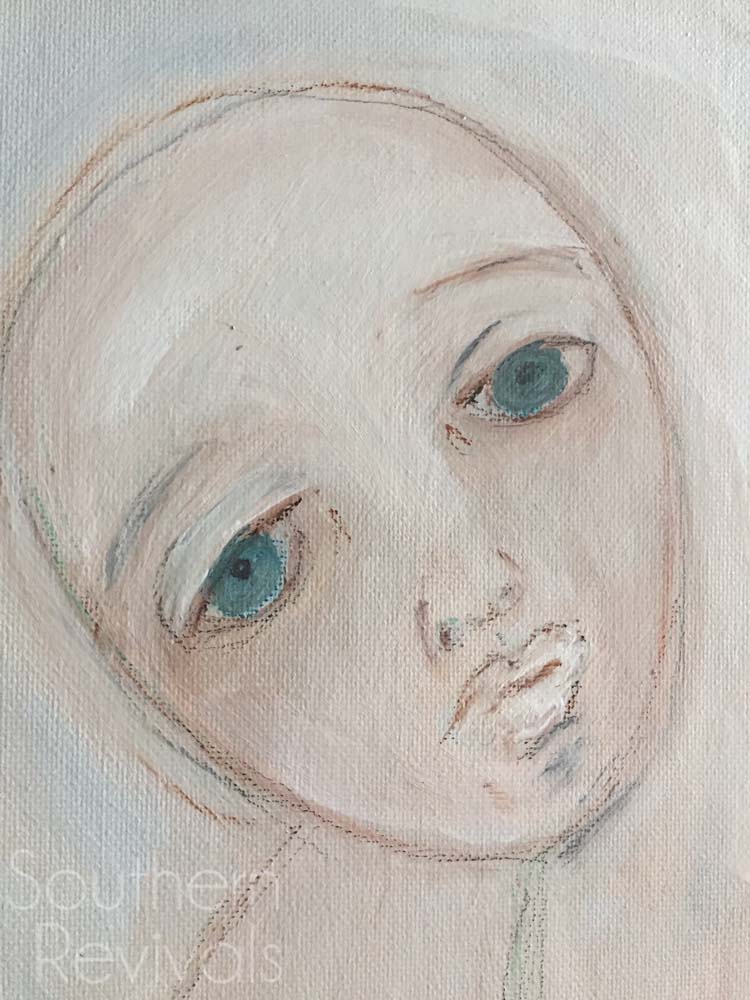 Because if you get them wrong, they just don’t look like people. 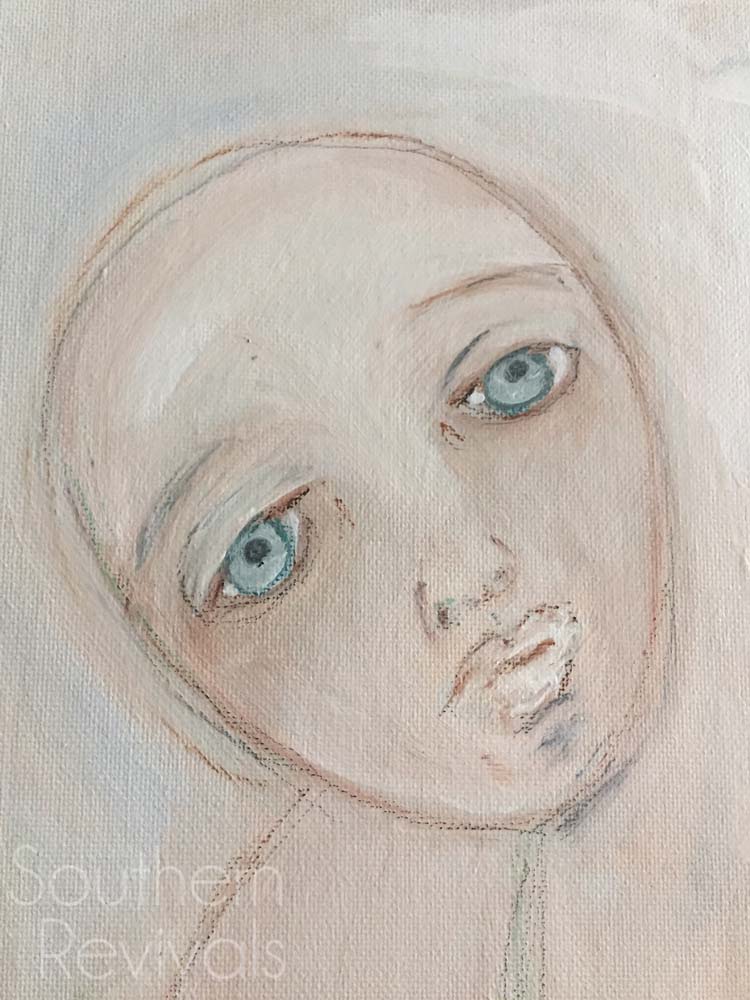 I just kept rewatching the videos and reworking her face until I could live with her. I figured I had done all I could at this point and it was time to move on to painting her. 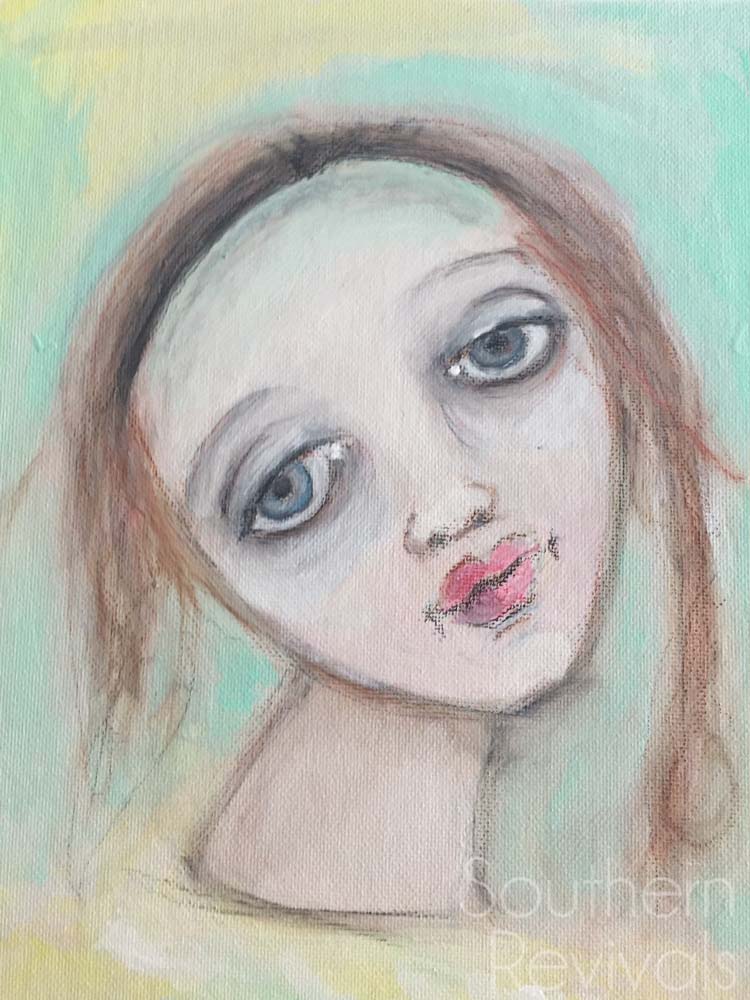 Accentuate her hairline, she said.

Give her little wisps of hair, she said. 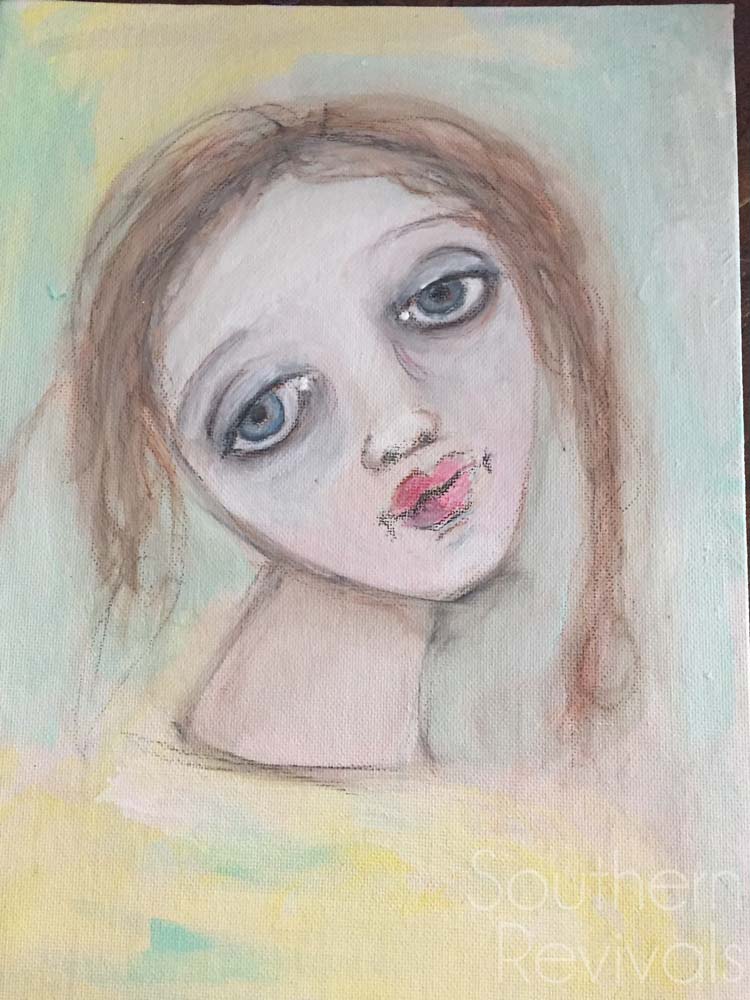 From alien to dying. Can I turn this around?

I’ll give her this though, she never said it would be easy. But she did say if I kept trying I could do it. 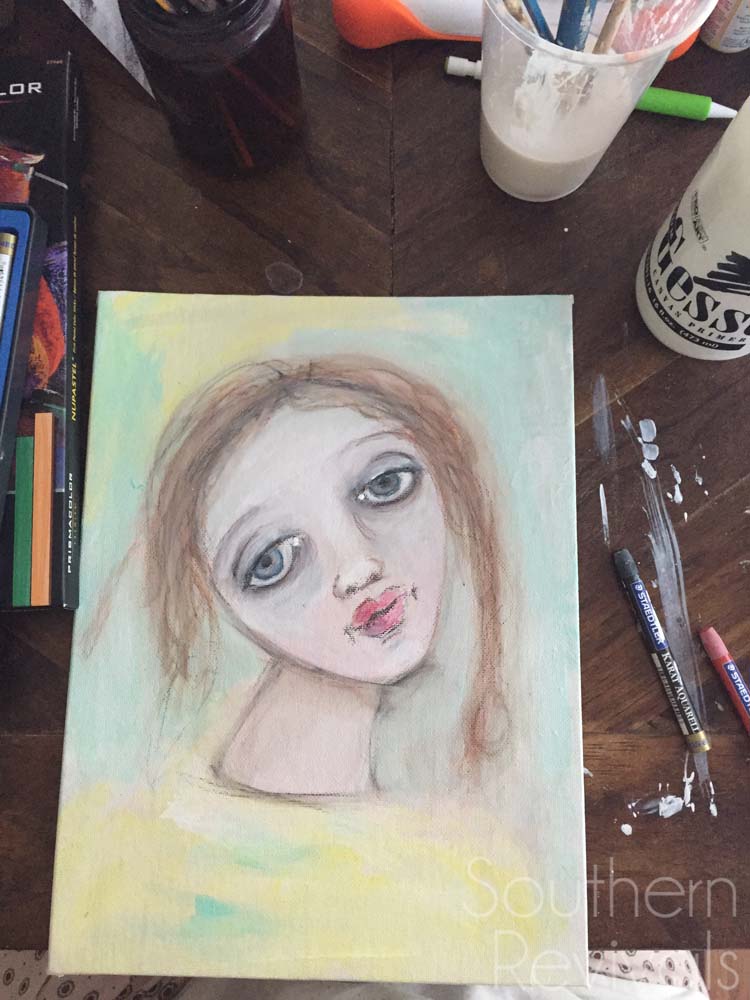 Since this painting is done in layers it isn’t meant to look finished yet but there were things about her process so far that weren’t working. And not just her uneven eyes.

I’d walk away from her for days. Every time I’d look at her I’d try to congratulate myself on something I’d done well. But all I really kept thinking, was something is off and I don’t know what it is or how to fix it. 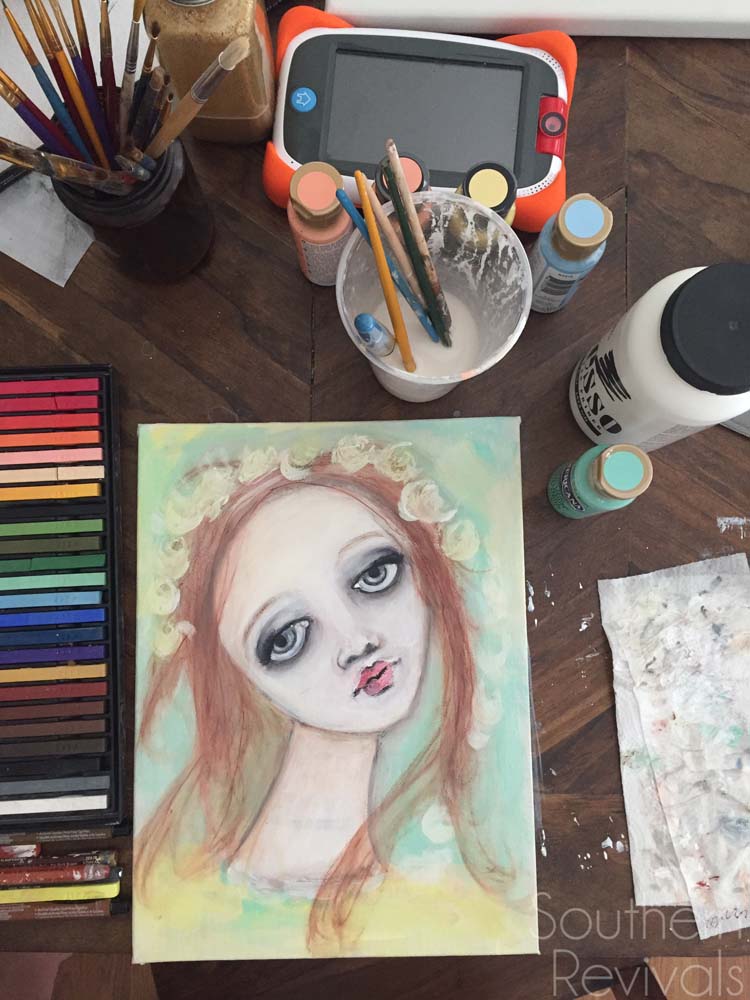 Then, just before I moved on to adding her flower headpiece and more hair, I realized it was her neck. So I made it longer and that was much better. 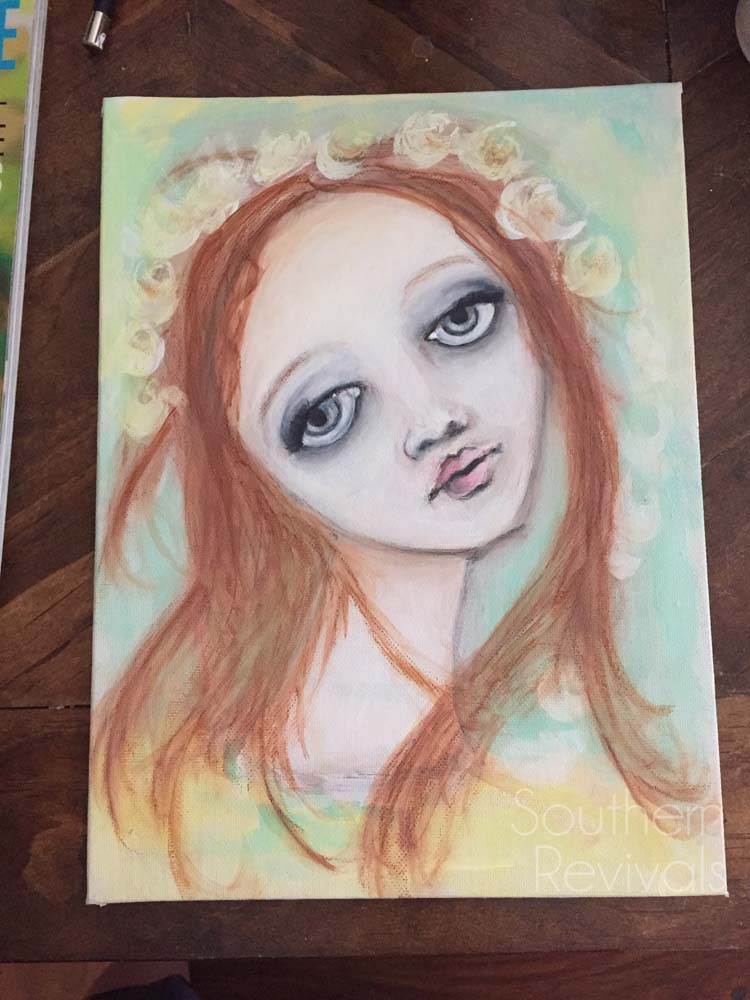 Then I wound up adding too much hair. 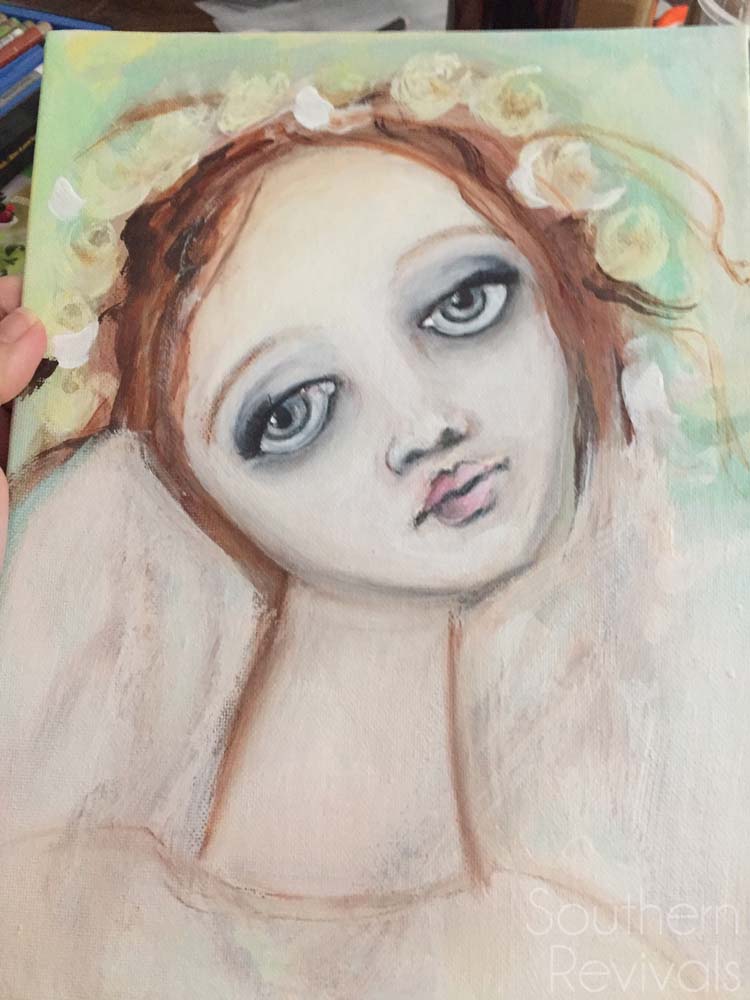 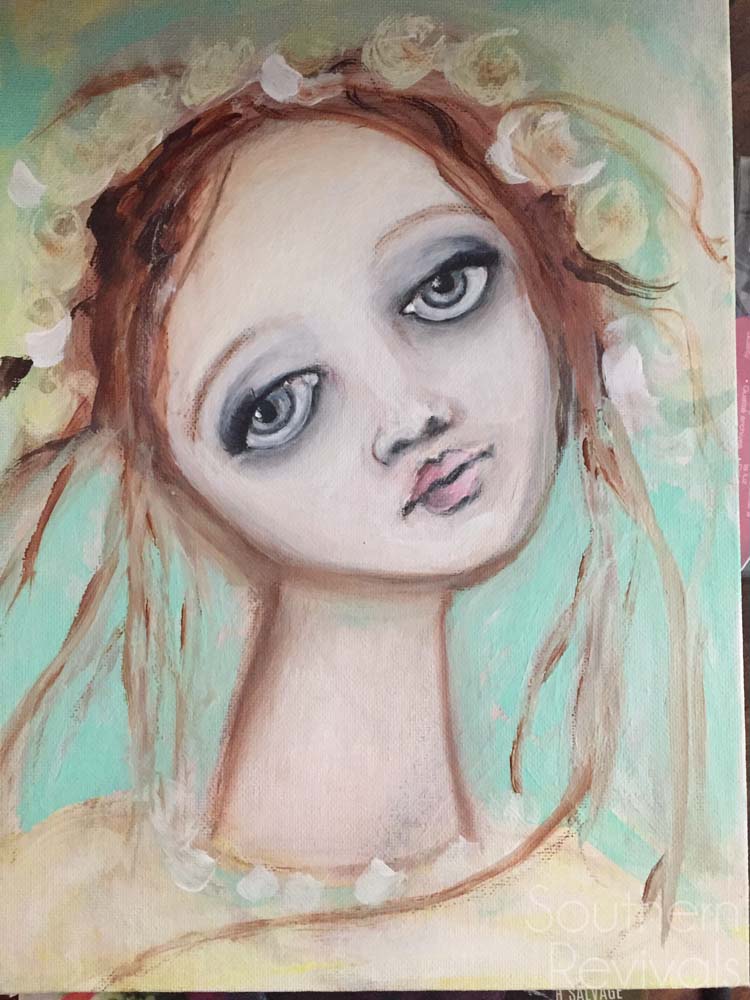 Looking back, I kind of wish I’d left her like this. A little faded. Her hair in a bun with just a few wisps escaping. 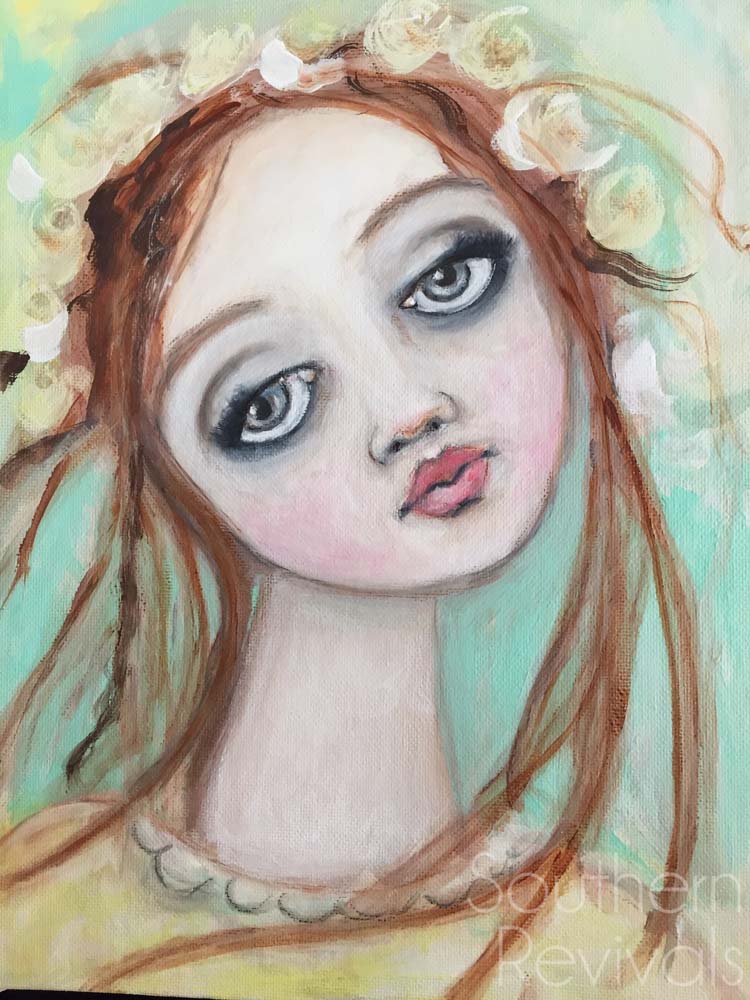 In the end, I made the space between her eyebrows bigger and I liked that better. She’s more colorful than I’d planned and she looks like she’s wearing makeup, which I hadn’t intended. 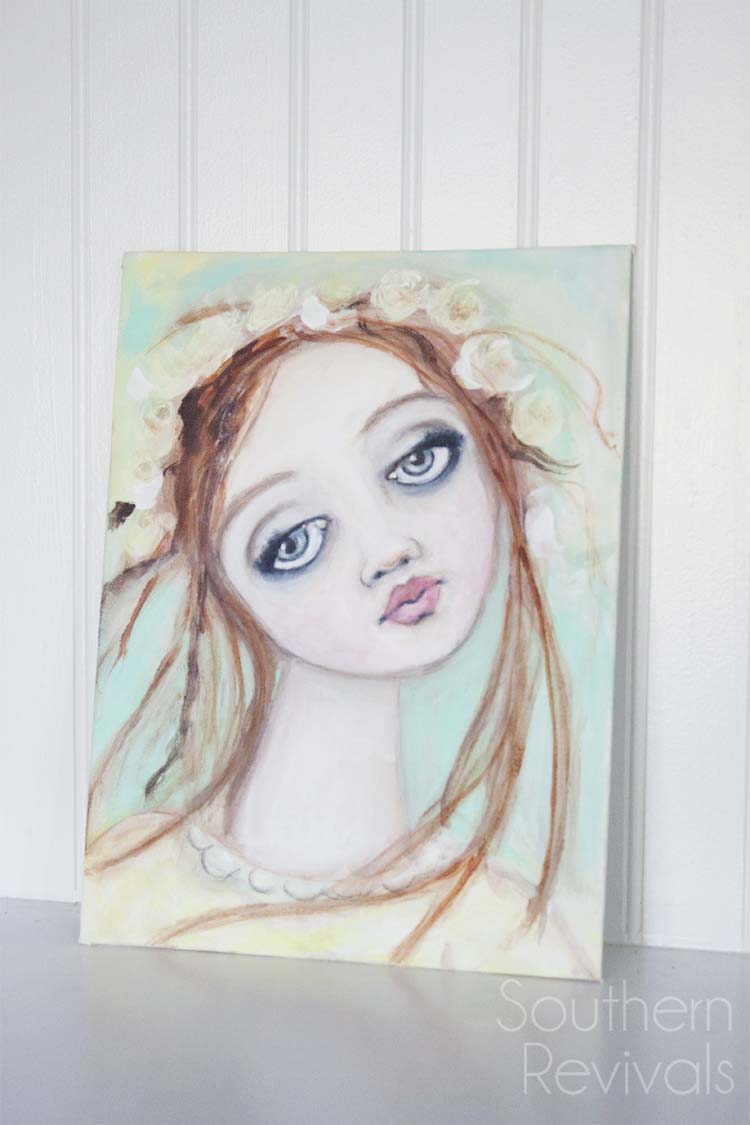 But that’s ok because she’s mine. I did it. I finished her and I’m proud of myself and that’s not something I say very often.

I’ve recently signed myself up for two more online people painting classes. One fine arts course where I will be attempting to learn to paint Johannes Vermeer’s The Girl With the Pearl Earring from Lucy Chen Fine Arts. I am trying to not to laugh hysterically at the idea but, hey, you can’t learn if you don’t try, right?

I also signed up for another painting class from Jane Spakowsky – Painting on Black. She’s another folk artist that I’ve known since my folk art days and I have always loved her work. And she’s just plain adorable and fun herself. 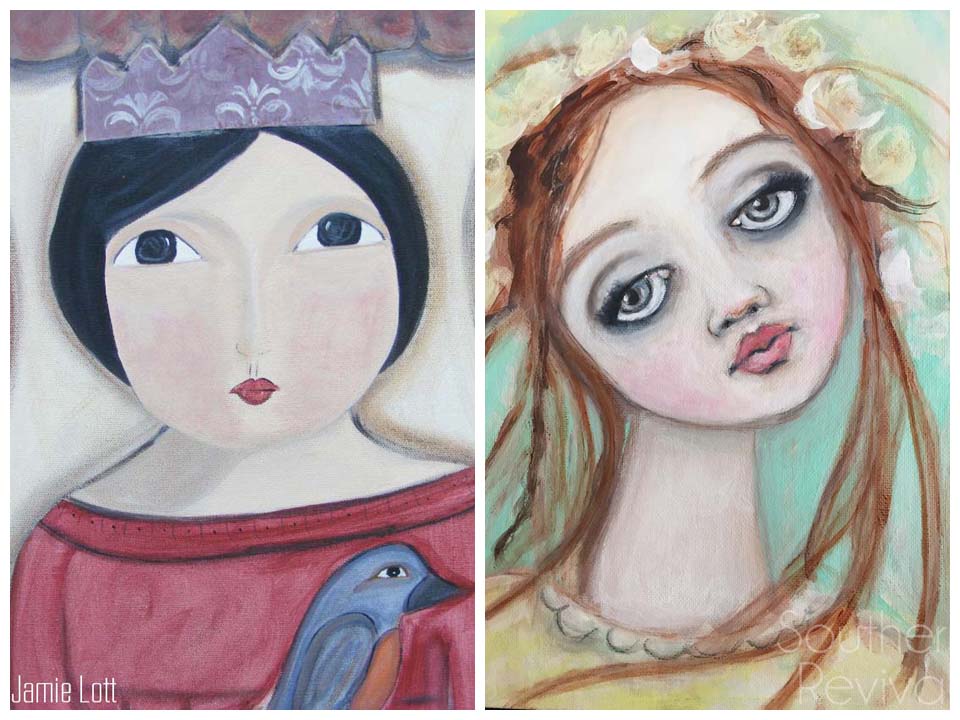 This morning my soon to be pre-schooler printed off an A is for Apple coloring page from ABCMouse.com. He has spent all morning selecting just the right colors and staying between the lines. It’s his first big boy coloring effort. When he finished we had to hang it in the foyer so everyone can see it.

My point is, don’t forget how important it is to keep learning new things. How fun it is. How accomplished you feel.

It’s also important to do nice things for ourselves. These endeavors, it’s what I’ll be doing for myself this summer. I’ll be hunkered over my table, my iPad alternately on pause and play, quietly plugging away at something that’s hard but something I’ve always wanted to do. Maybe the guitar’s next! What have you been dying to learn? What will you do for yourself this summer? 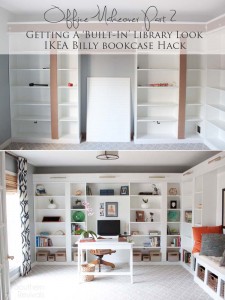 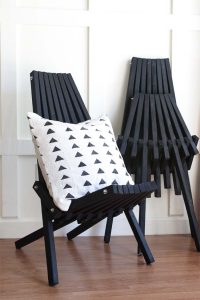 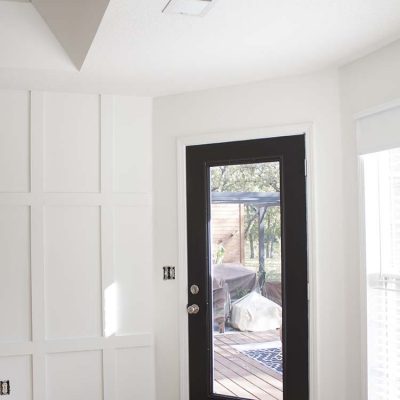 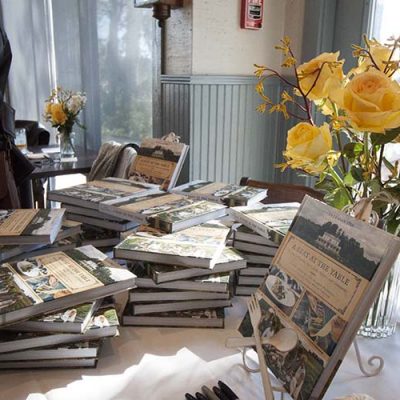 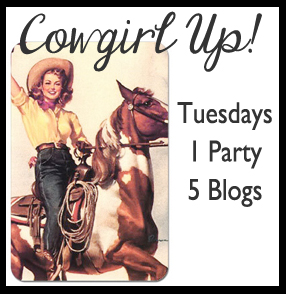 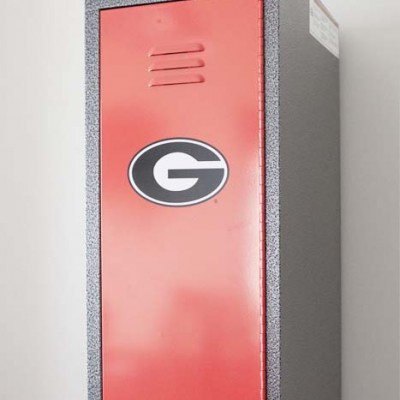 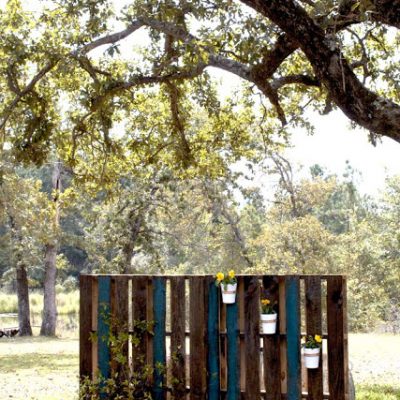